Web scraping is the process of extracting data from a website. Scraping can be a powerful tool in a developer's arsenal when they're looking at problems like automation or investigation, or when they need to collect data from public websites that lack an API or provide limited access to the data.

People and businesses from a myriad of different backgrounds use web scraping, and it's more common than people realize. In fact, if you've ever copy-pasted code from a website, you've performed the same function as a web scraper—albeit in a more limited fashion.

Web scraping is used in many sectors and has many applications. Some common uses include:

In this tutorial, you will learn the basics of web crawling, data extraction, and data parsing using the Elixir language. Due to its high performance, simplicity, and overall stability, Elixir is a great choice for web scraping. You'll also learn how to use Crawly, a complete web-scraping framework for Elixir.

Note: The code examples for this tutorial can be found in this GitHub repository.

In recent years, graphics cards have been in low supply, despite very high demand, making it difficult to find available stock, and driving prices higher when you could.

Knowledge of web scraping would allow you to find available graphic cards at the lowest possible price. In this tutorial, you'll crawl Amazon's selection of graphic cards to get the lowest-priced graphics cards.

To do this, you'll build a web scraper to extract price information from several websites for this tutorial. The scraper will collect all the price data so that it can be analyzed and compared later. This is a great foundation for building a price alert service, or even a scalping bot you could use to purchase products in limited supply.

Setting Up the Project

To begin, you'll need to create a new Elixir project:

The --sup flag is used to create a new project with an OTP skeleton, including the supervision tree. This is needed because our price_spider project will be responsible for spawning and managing several processes.

Once the project is created, you will need to update the list of dependencies in the price_spicer/mix.exs:

The libraries we are installing will be used to scrape data from websites and extract the data collected for further use.

Open price_spider/config.exs and add the following:

This is setting a specific user agent for the crawler. By having it mimic a browser, you minimize the likelihood of being blocked by the website and make it more likely that you'll get the data you need. Tools like ScrapingBee provide a list of rotating proxies and generate valid user agents; this is a great aid when scraping large amounts of data.

Web crawlers, often also referred to as spiders or simply crawlers, are a type of bot that systematically goes through the web, collecting and indexing data from web pages.

In the context of Crawly, spiders are user-created behaviors that Crawly uses to scrape data from a set of websites. As with any behavior, your spider needs to implement the following callbacks:

Create your spider in the lib/price_spider/spiders/basic_spider.ex file:

It's time for you to run your first spider. Start the Elixir interactive console with iex -S mix and run the following command:

As soon as you run the command, Crawly schedules the spider to run for each one of your start URLs. When it receives a response, Crawly then passes the response object to the parse_item/1 callback to process the response and extract the data.

There hasn't been any parsing logic implemented in this basic example, so it returns an empty Crawly.ParsedItem structure. In the next section of this tutorial, you'll use Floki to extract the data from the response.

Extracting Data From the Response

As part of Crawly.Spider behavior, parse_item/1 is expected to return a request-and-items structure. Before implementing the logic, let's explore the data you're working with.

Open the Elixir interactive console and run the following command:

You should see a result similar to the following: 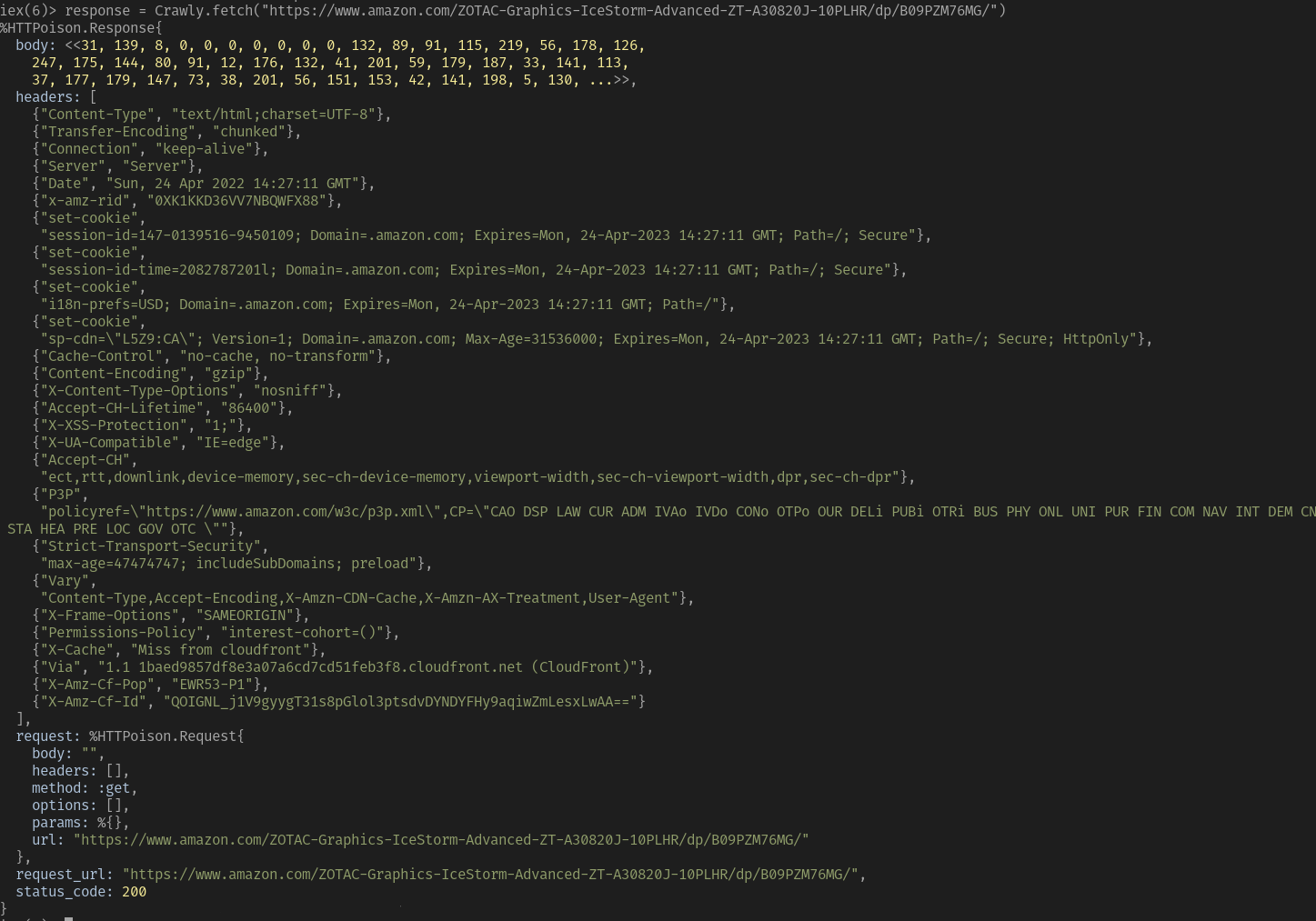 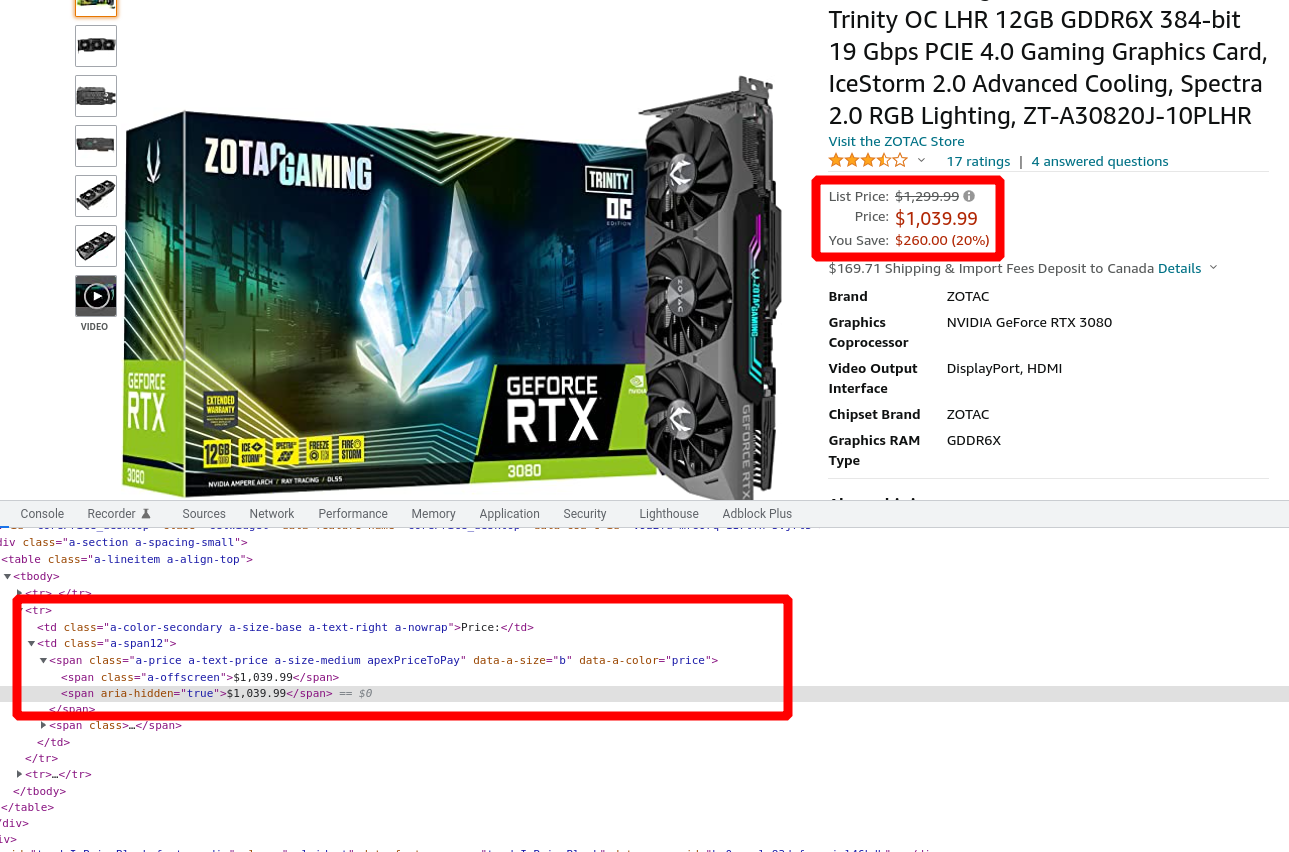 You can locate the price by exploring the data further through the Elixir interactive console. Run the following commands:

Assuming everything worked correctly, you should see an output like the following:

Now you can wire everything into your spider:

You can check that things are working correctly by running the following command:

Earlier on our initial setup, we configured Crawly to write the results of the crawler into a file in the tmp/ directory. This file will have the same name as the spider, plus a timestamp.

Now that you have a working Amazon spider, it's time to take it further. At this point, the spider can only crawl the specific URLs that it's been provided with. You can take the spider further by allowing it to discover URLs from a search results page.

Create a new file under lib/price_spider/spiders/amazon_spider.ex and add the following code:

These are the main changes you've made to the spider:

You can run your new spider by running the following command:

After running the enhanced version of the spider, you should see more items processed:

You can see the generated list of items by looking at your tmp/ directory file, which should look something like this:

You've successfully crawled Amazon and extracted the prices of video cards, data that you could use as the basis for any number of other applications.

In this tutorial, you've learned how to use Crawly to crawl websites and extract data from them. You've also learned the basics of web scraping, and have the foundation to build web crawlers and web scrapers.

Keep in mind that you've only scratched the surface of what Crawly can do, and more powerful features are available. These features include things like request spoofing, which is a way to simulate a different user agent, or a different IP address; item validation through pipelines; filtering previously seen requests and items; concurrency control; and robots.txt enforcement.

As you do more web scraping, it's important to consider the ethical implications of crawling websites and how to do it responsibly. A great starting point can be found in Crawly's official documentation.

Allan MacGregor is a software engineer and entrepreneur based in Toronto, with experience in building projects and developing innovative solutions.